The exact time in the city Moscow, Russian Federation

The exact time is now in your city Moscow, Russian Federation

When the clock is changed in 2023 in Moscow, Russian Federation
UTC offset year round
Time zone used — UTC+03:00 View on a big map

Moscow is the capital of Russian Federation. Moscow is located on the continent of Europe.

Time zone in Moscow, Russian Federation define as UTC+03:00, with daylight saving time UTC so at the moment the current time in Moscow is Standard time takes place after 90 days.

Current time in popular cities of the country Russian Federation

Current time in different cities of the country Russian Federation 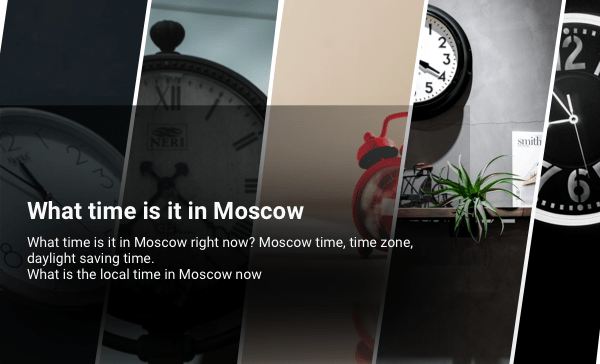 The time zone in Moscow is UTC+3 (GMT+3). UTC, or Coordinated Universal Time, is a common standard by which people determine minutes and hours and was introduced to replace the outdated Greenwich Mean Time. Historically, this area of London was the zero meridians, which was used by sailors to determine time. Incidentally, Russian aircraft and helicopters started using UTC instead of Moscow time in 1993.

Moscow time was used on railroads since 1919, and this factor influenced the introduction of time zone throughout the USSR. Until August 2018, Russian Railways tickets indicated departures by Moscow time; now, for long-distance trains, only the local time at both points is indicated.

Facts about the geography of the capital:

Regions in the 3rd time zone began switching to Moscow time, especially after 1957, thereby moving back one hour. At some point, the Komi and Nenets National Districts joined the Moscow time zone. 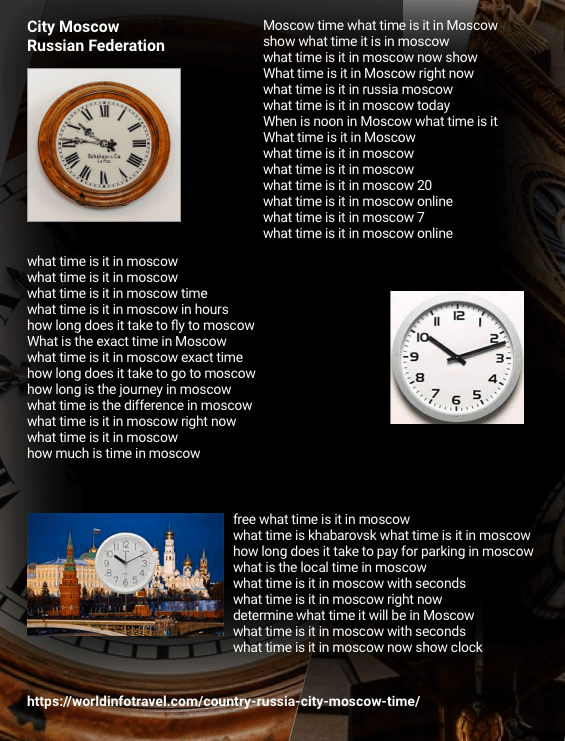 Interesting: the chimes, to the chime of which Russians celebrate the New Year are located on the Kremlin (Spasskaya, also Frolovskaya) tower in Moscow, built in the late XV century. In 1626 after the fire they built a similar clock in the same place. Time is synchronized to the nearest second these days by connecting the clock to the control clock through a special cable.

About the time zones of Russia

Russia had a time zone system since 1919. Moscow was put in the 2nd time zone, like all other cities to the east of the 37.5° meridian. The transition was 4 hours. In autumn, the clocks were reset by one hour only, so Moscow’s difference with World Coordinate Time remained +3.

The most interesting is the time difference between different cities in the country and Moscow. In some cases, it reaches 9 hours, such as in Petropavlovsk-Kamchatsky.

The difference with other cities in Russia is as follows:

In 1981, about 30 regions «parted» with Moscow time, but in 1982 changed time zone again. By 2010 several more regions moved to the same administrative time zone as Moscow: Samara, Volgograd, Saratov, Astrakhan, Izhevsk, Kirov, and Ulyanovsk. Some, on the contrary, moved from it: to the Baltics, Kaliningrad region, Ukraine, Belarus, and Moldova.

The difference between Moscow and the countries of the world:

Important: in writing, the abbreviation MSC is often used in lowercase letters. The MSC in capital letters is found in the Federal Law «On the Calculation of Time». We write «MSK» if we call the time zones of Russia, or the time of the region relative to Moscow. We use MSK as a supplement to the data if we indicate an event relative to Moscow.

About daylight saving time and wintertime

In many countries, this transition is maintained, but in Russia in 2011, the transfer of hours in the fall was abolished, since then the country lives by daylight saving time. Since 2014, according to the law «On the Calculation of Time», Moscow time became UTC+3. At the same time, Udmurtia and the Samara region retained UTC+4. Before 2018, Astrakhan, Saratov, Ulyanovsk, and Volgograd moved one hour ahead of Moscow time. The latter still returned to the Moscow time zone in 2020.

About the negative consequences of the transfer of hours say, doctors, at the same time economists do not see money savings from the transition and also point to the inexpediency of returning to summer and wintertime.

«Changing the hands is especially harmful to the body in October when people are forced to wake up an hour earlier than the time they are used to. During this period, the number of heart attacks, hypertensive crises, and other problems with the cardiovascular system increases. At the same time, people are about 12% more likely to call an ambulance,» said Alexei Inyushkin, head of the Department of Human and Animal Physiology at Samara University.

The right time is now important not only biologically, but also economically. It plays a decisive role in travel so that the passenger will not be late for the train or the plane. In addition, in the era of numbers, even a millisecond can be worth a fortune when trading on the stock exchange or deciding exactly who will book a hotel or buy an item in an online store.